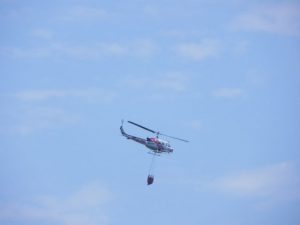 According to Sgt. Jeff Wilson from the Tuolumne County Sheriff’s Office, the accident was caused when the pilot in his 1947 Stinson aircraft “overshot the runway”.

CAL Fire reports that the unidentified 53-year-old man also had a daughter on board, who was not injured. The plane was totalled. The crash was near Pioneer Park.

The crash also caused a small spot fire that was quickly contained.