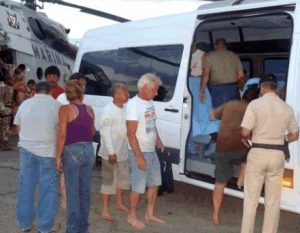 Twain Harte, CA — At least one missing tourist who was on a boat that capsized off the coast of Mexico is from Tuolumne County.

Not all of the names have been released, but the Associated Press is reporting that one of the missing men is 62-year-old Mark Dorland of Twain Harte.

26 American men were on the boat when it overturned Sunday, about two miles off the coast of Baja, and only 19 have been found. The Modesto Bee is also reporting that two of the men located safe are from Sonora, Bob Higgins and Steven Sloneker.

It was a vacation fishing trip that many of the men had taken yearly around Independence Day. A storm reportedly struck at around 2:30am Sunday, causing the boat to eventually overturn.