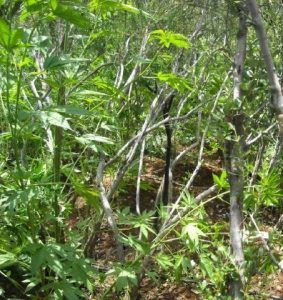 San Andreas, CA– As the result of a multi-agency effort, over 28,000 marijuana plants were eradicated in Calaveras County.

The Calaveras County Sheriff’s Office reports that over the past week, members of the Calaveras Narcotic Enforcement Unit and California Department of Justice-CAMP (Campaign Against Marijuana Planting) team conducted operations to eradicate illegal marijuana gardens.

This team also included agents from the Army National Guard and the U.S Forest Service.
Six gardens were located in secluded portions of the county on land managed by the Bureau of Land Management and private land.

Inside the gardens, authorities located established campsites consisting of living quarters with kitchen areas and areas for the cultivation and processing of marijuana. A large amount of food and necessities also indicated that persons were intending to remain in the grow sites for several months.

Firearms and ammunition were located in the camps along with camouflage material to be used to conceal the location of the grow sites and those tending the area. A large amount of fertilizers, pesticides and other chemicals used in the cultivation of marijuana were also present.

Based on the evidence located at the scene, authorities suspect that the gardens were being cultivated by a drug trafficking organization. No suspects were located and no arrests were made.