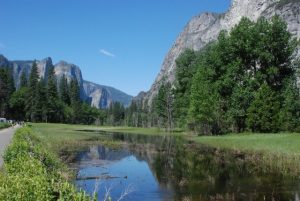 Yosemite, CA — One person is confirmed and another is suspected dead after a hiking trip in Yosemite National Park Wednesday.

One of the bodies was located yesterday and a search continues today for the second. The names of the men have not been released as it is an ongoing investigation. Areas around waterways have been particularly dangerous this year because of the high winter snowpack.

The Wapama Bridge is often used by hikers and campers in the Hetch Hetchy area. The men were hiking with three other people.