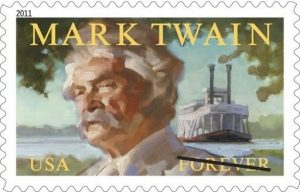 Angels Camp, CA– This weekend the new Mark Twain commemorative postage stamp will be unveiled at the Angels Camp Museum.

Museum Director Craig Hadley says the U.S Postal Service is honoring the author and humorist with its 27th stamp in the Literary Arts series. It will also be unveiled at Twain’s childhood home, according to Hadley.

“We’re just very honored that the Postal Service has agreed to do the unveiling at our museum at the same time they’re doing the unveiling in Hannibal, Missouri,” said Hadley. “Saturday, we’ll have the stamp for sale and there will be postal volunteers doing the cancellations on the stamps. There will also be some representatives from the Postal Service and city as well.”

Hadley says the stamp is a portrait of Twain in his later years and based on a photograph taken in 1907.

“We’re really excited about it because it’s not very often you have a stamp that our community can identify with,” said Henderson. At the beginning of the year when I saw the pictures of all the stamps coming out, I saw the Mark Twain stamp and said we’ve got to do that. So we contacted headquarters and asked to be a part of the official unveiling. It will be on sale on Monday at all the post offices.”

The unveiling of the Mark Twain stamp is Saturday at 10 am at the Angels Camp Museum located at 753 Main Street in Angels Camp.