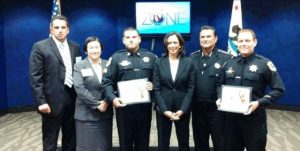 Senior Deputy Kevin Stevens and Deputy Josh Shemenski tried to pull over a vehicle driven by Richard Cooper on Railroad Flat Road back on January 17, and Cooper eventually opened fire with his shotgun.

Stevens and Shemenski were nominated for the Attorney General’s Law Enforcement Officer’s Commendation Award, and publicly recognized by Harris at a yearly awards luncheon in Sacramento. The two were nominated for their courage and professionalism during the volatile and life-threatening situation.

To read an earlier article about the chase click here.