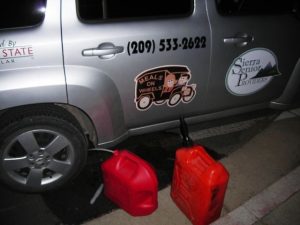 Sonora, CA– A group of teenagers were arrested yesterday for allegedly stealing gas in Sonora.

The Sonora Police Department reports that shortly before 1 am Tuesday, officers on routine patrol, found two vehicles and five teenagers behind the Tuolumne County Senior Center at 540 Greenley Road.

After the teens noticed that they were being observed, they fled the scene on foot leaving behind their two vehicles.

Because gas lines had been cut and gas was removed from some of the Senior Center vehicles, officers determined that the suspects were in the process of stealing gas.
Identification, along with a lock pick set and pass keys used to open and start several different types of vehicles were found inside one of their cars. Several other burglary tools were also found.

To locate the suspects, officers went to the address of one of the registered vehicle owners and found four of the five suspects hiding in the bushes. Most of the teens admitted to being involved in the gas thefts and had text messages on their phones regarding meetings to steal gas.  They were taken into custody.

The fifth suspect was apprehended a short time later when he called the Sonora PD to report his vehicle stolen. Officer’s contacted him and showed him text messages which he had made regarding the gas theft meetings. This suspect then confessed to his involvement.

All five suspects were taken into custody and booked at the Tuolumne County Jail on felony conspiracy charges along with several other misdemeanor charges related to the gas thefts.