Business As Usual After Fire 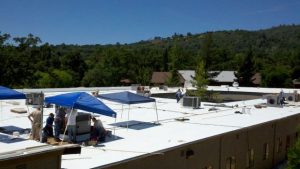 Sonora, CA– The Tuolumne County Department of Social Services remains open this week after a fire over the weekend.

The early morning fire Saturday at 20075 Cedar Road North, started at around 2 am and was controlled by 4 am, according to Cal Fire.

“We were very fortunate with the sprinkler system in the building,” said Deputy County Administrator Maureen Frank. “There was one sprinkler head right below where the fire started, so that kept the fire contained to the back of the building.”

Frank says that in three of the heavily damaged offices, all of the carpet and drywall has been removed and will soon be replaced. She also says employees will be displaced for at least three weeks in trailers and other locations.

“The damage was in the administrative wing,” said Human Services Agency Director Ann Connelly. “And our focus of course was to get operations up and to make sure that staff had the tools they need, so they could open Monday morning. It’s business as usual over at the Social Services building.”

The cause of the fire is still under investigation.