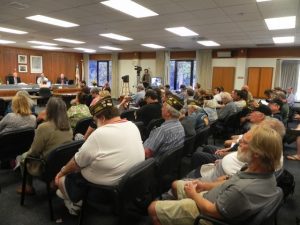 Sonora, CA – Local Veterans gathered at the Tuolumne County Supervisors meeting room to show displeasure for the county’s proposal to reduce a Veterans Service position from full to part-time.

The change was designed to save the county approximately $26,000. It is one of the 80 plus positions that were set to either be reduced or eliminated. Members of the Board of Supervisors indicated that they had received calls from members of the Veterans community prior to the meeting, and appeared to know that the large crowd would be on hand at the meeting.

District Five Supervisor Dick Pland stated that he wanted to address the Veterans Office issue at the beginning of the meeting, so that it could be resolved quickly.

“The Veterans Office in Tuolumne County is known as being ‘the outstanding office,’ in the Mother Lode,” said Pland. “And probably throughout California as far as I know.” Veterans in the room cheered and applauded.

Pland moved that the Veterans Service position be funded fully, and it was quickly seconded by District Two Supervisor Randy Hanvelt. It was approved with a 5-0 vote. CAO Craig Pedro was directed to find $26,000 in savings to cover the gap. The Supervisors continue to hold a public hearing on layoffs this morning. You can listen live in the multimedia section of myMotherLode.com by clicking here.