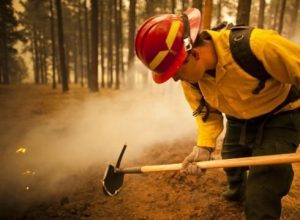 Vallejo, CA– A slower than normal start to the wildfire season in California has allowed about 1,200 firefighters from the U.S Forest Service to assist with fires in the Southwest.

This  includes the Wallow Fire, which has now burned over 389,000 acres in eastern Arizona and western New Mexico.

“In California, we frequently receive assistance from other states during multiple fire outbreaks and other periods of high fire activity,” said Joseph C. Millar, Director of Fire and Aviation Management from the California U.S Forest Service. “The combination of favorable conditions over most of our region and the fact that it’s June and we’re fully staffed has allowed us to reciprocate this valuable assistance.”

Crews from the Stanislaus National Forest have been engaged in fire fighting off of the Forest for several weeks. The Groveland Hotshots, 6 engines and 14 additional support staff members have been dispatched to fires in the Southwestern states. The Stanislaus Hotshots returned home Thursday from the Wallow Fire in Arizona to begin a rest period.