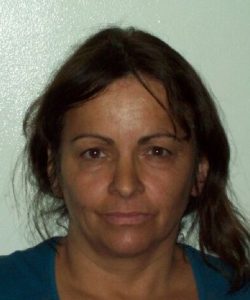 According to the Sheriff’s Office, at around 7:30 pm, Deputy Paul Speers was patrolling the area of the Sierra Rock Quarry where numerous thefts have recently been reported.

He located a black Ford Ranger with no occupants inside, that was parked in a driveway and blocking access to the business. While reading off the license plate to Dispatch, he was approached by 50-year-old Jeanette Gutierrez of Manteca carrying a canvas bag.

She told Deputy Speers she was collecting “pretty rocks.” After a search of Gutierrez, Deputy Speers found a small bag containing suspected methamphetamine. When Deputy Speers pulled the bag from Gutierrez’ pocket, she claimed she was wearing someone else’s pants.

Deputy Speers noticed two different sets of foot prints in the mud outside the Ranger and asked for another Deputy to assist him. Deputy Frank DeRocher arrived and began searching the area. He soon located 44-year-old Richard Taberna of Manteca, hiding behind a tractor on Sierra Rock property. Taberna said he was there with Gutierrez collecting rocks.

Taberna had a pocket full of jewelry that he claimed belonged to Gutierrez. He also had methamphetamine and paraphernalia in his pockets. A search of the Ranger revealed 3.8 grams of marijuana.

Both Taberna and Gutierrez were arrested and booked at Tuolumne County Jail for possession of a controlled substance, conspiracy, loitering on private property, petty theft, possession of marijuana and possession of stolen property.