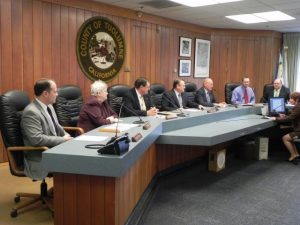 County Administrator Craig Pedro says the county’s General Fund is facing a shortfall of $5.2 million for the next fiscal year that starts July 1st. Pedro will present a report Tuesday to the Board of Supervisors on the development of the 2011-12 budget and proposed changes to county government.

An item that could spark discussion is Pedro’s recommendation that the Public Works Department and the Community Development Department be placed under the direction of a single department head beginning in October. Pedro confirms to KVML News that he will recommend that Community Development Director Bev Shane lead the new Resource Management Agency. That transition would leave longtime Public Works Director Peter Rei without a job. “With regret, you have to make a choice and recommendation,” says Pedro. “That will be my recommendation, but it will ultimately be a decision of the Board of Supervisors.”

35 of the proposed layoffs put forward by Pedro are connected to Tuolumne General Hospital and the takeover of the Long Term Care division by Avalon Healthcare. Pedro says 10 of the 35 current workers will be retiring, and many others will have a chance to work for Avalon after July 1st.

An additional 35 county workers would receive a layoff notice, 14 workers are retiring, and the seven remaining positions are currently vacant. Pedro says the layoff number could “soften” in the event that Governor Jerry Brown’s tax extensions are approved by voters. If that happens, 10-15 positions could be saved.

Tuesday’s meeting begins at 9am in the Board of Supervisors meeting room. You will be able to listen live in the multimedia section of myMotherLode.com.