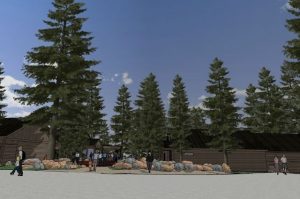 Arnold, CA — It has been 15 years in the works, and the state has finally green-lighted construction of a new Visitors Center at Calaveras Big Trees State Park.

The $2.7 million project has encountered many delays, the most recent being the Department of Finance making sure that the park was not on state’s closure list due to California’s budget problems. Earlier delays were attributed to changes in state fire codes and revisions to the site and building plans.

Calaveras Big Trees Association President Marcy Crawford received a phone call this week from Jess Cooper, District Superintendent for the State Park’s Central Valley District, letting her know of the approval to move ahead. An e-mail to Crawford from California State Parks Director Ruth Coleman says, “This park deserves a quality project and I’m glad we are finally seeing it come to fruition.”

Funding for the project will come from voter approved state bonds and a $500,000 donation from the Big Trees Association. A groundbreaking ceremony is scheduled for June 18 at 1pm. The Visitor Center is expected to open in late 2013. Calaveras Big Trees State Park hosts approximately 200,000 visitors each year.