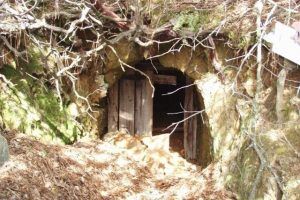 “You can imagine that gold miners back in the 1860’s didn’t want people to know where their gold mines were,” said Drysdale.  “They didn’t exactly write these things down or map them out very well. So we’re still finding them all the time.”

Each mine may have multiple man made “features,” such as shafts, tunnels, machinery, facilities or waste piles that present physical or environmental hazards.

The Bureau of Land Management identified potentially dangerous features in Tuolumne County at six sites where no active mining claims are in place. Using about $150,000 in American Recovery and Reinvestment Act funds, the Office of Mine Reclamation oversaw the remediation of 23 mine features from the beginning of 2011 until early May.

Four shafts were backfilled with mine waste, a dozen mine features were sealed with expandable polyurethane foam, and seven tunnels were fitted with bat gates, which allow bats and other animals to come and go freely without human interference. Much of the work was done around Columbia and Big Oak Flat.

“Our goal is to do an additional 22 remediation projects at 10 sites in the county either this fall of next spring,” said Steve Jenkins, head of OMR’s Abandoned Mine Lands Unit. “We got off to a bit of a late start this year because the rainy conditions made it so difficult to work in the foothills.”

Anyone who encounters an abandoned mine site is asked to call 1-877-OLD-MINE so the site can be investigated and ultimately remediated.