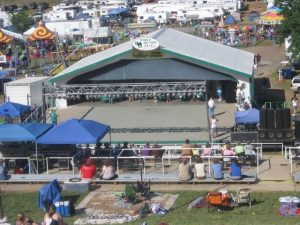 Lisa Mayo, Executive Director of the Calaveras Visitors Bureau says the Calaveras County Fair and Jumping Frog Jubilee will be featured on the Tonight Show with Jay Leno Friday night.

“The segment is called “Rove Across America,” said Mayo. “We sent the crew to a number of places. I think they’re going to be highlighting how the frogs are found, which is always something people are very curious about. Rove McManus is the host, so he was the guy out here filming and involved with the frog jump.”

Mayo says it’s been about 10 years since the Calaveras Fair has been featured on the Tonight Show and it was one of the lead writers who suggested they return in 2011.

“I hung out with the team for a couple of days and they were just a lot of fun and really embraced our tradition,” said Mayo. “It was really great working with them.”