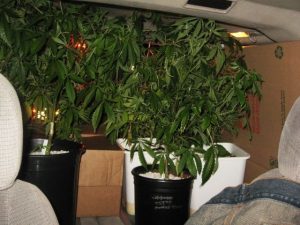 According to the Sonora Police Department, an officer stopped a van for speeding on Greenley Road at around 11:20 pm. As the officer approached the suspects, he could smell the odor of fresh marijuana coming from inside the van.

The officer investigated the driver, 64-year-old David Dohoney of Pittsburg, CA and his passenger 43-year-old Keith Scott, also from Pittsburg. Inside the vehicle were 45 marijuana plants along with $5,000 in cash.