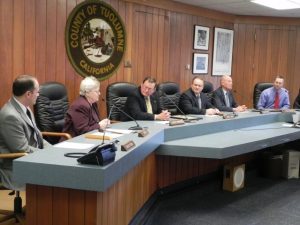 Sonora, CA — The Tuolumne County Supervisors heard concerns from residents about a decision to build housing for the mentally ill in Sonora.

Two homes are planned to be built in the 500 block of Lyons Street. The decision to purchase and make improvements to the property was approved unanimously at a past meeting of the Supervisors.

Lyons Street resident Malcolm Maxwell brought a petition to the Board of Supervisors Tuesday which he says was signed by 110 residents. It asks that the vote be reversed. He complained that the county decided to build the homes on Lyons Street, without first notifying surrounding residents. He also stated that there are safety issues because there are no sidewalks in front of the homes.

Later during the meeting the Supervisors adjourned into closed session to discuss “anticipated litigation” related to the Lyons Street project. The Supervisors did not issue a statement following the session.

County leaders had earlier stated that Lyons Street was partially selected because it is near the downtown area. It was also noted earlier that no one deemed to be dangerous would live at the homes.