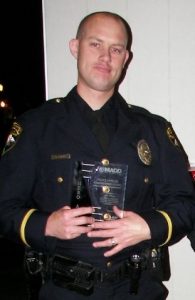 Angels Camp, CA– An Angels Camp Police Officer has been recognized for his outstanding efforts in arresting drivers under the influence of alcohol and drugs.

An Officer with the Angels Camp Police Department for 6 years, Adams is also recognized by the State of California as an expert in the detection of persons driving or under the influence of controlled substances.

He has undergone training and certification through the National Highway Traffic Safety Administration and the CHP which includes over 124 hours of instruction in the detection of persons under the influence of alcohol and narcotics.

In 2010 Officer Adams led the Angels Camp Police Department with 47 Driving Under the Influence and Drugged Driving arrests.