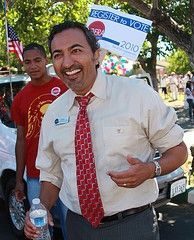 Democrat Ami Bera says he has raised over $230K for his District Three Congressional run.

Bera’s campaign released a preview of his FEC first quarter financial numbers, which candidates must submit by Friday. “Since I announced that I am running again in 2012, the broad outpouring of community support for our congressional campaign has been incredible,” states Bera.

Bera says he has received donations from over 600 individual donors during the first quarter. Bera, an Elk Grove physician, lost to Lungren by seven percentage points during the last Congressional election. District Three covers Calaveras County.