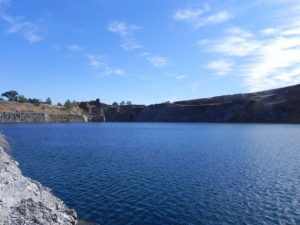 Jamestown, CA — Two people have died while Scuba Diving at the Jamestown Mine property.

Late Saturday afternoon the Tuolumne County Sheriff’s Office responded to a report of a missing person at the mine site off Harvard Mine Road. They were on private property in an area that is often used as a swimming hole during the spring and summer.

A deputy spoke with 41-year-old Cameron Wheeler of Stockton, who stated that he and his friends had been scuba diving throughout the afternoon. One of his friends, 37-year-old Jamie Pollard of Stockton, reportedly started to panic while in the water, so Wheeler assisted him to the surface.

Noticing that another friend, 34-year-old Dale Allen Dedic of Lodi, was still under water, Wheeler dove down to look for him. When he could not locate Dedic, he swam back up and called 911.

An ambulance responded and took Pollard to Sonora Regional Medical Center where he was later pronounced dead. Dedic could not be located over the weekend. This morning the U.S. Army Corps of Engineers searched the water and found his body at approximately 135 feet.

Sgt. Jeff Wilson of the Tuolumne County Sheriff’s Office says an investigation is ongoing, and the exact cause of death in both cases is unknown. Foul play has been ruled out.
More information will be released when it becomes available. Officials are still out at the mine site this afternoon.