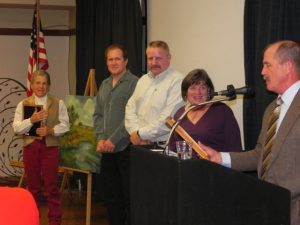 Sonora, CA – Over 300 were hand for the annual TuCare Dinner and Auction held Saturday evening at the Sonora Elks Lodge.


Keynote Speaker Dan Tomascheski, the VP of Resources for Sierra Pacific Industries, brought an upbeat message about the newly renovated Standard Mill. He said that S.P.I. is noticing an uptick in the timber market as opposed to a couple of years ago, when they were forced to temporarily close the Standard Mill. Tomascheski says the housing market is still slow, but demand is picking up for lumber at big box stores such as Lowe’s and the Home Depot, as well as niche markets.

“We can make this thing work,” stated Tomascheski, on multiple occasions during his speech. The Standard Mill will employ around 130 workers once the renovation is completed. Tomascheski says “the hope” is that the mill will open in May. He indicated that the opening date is somewhat dependent on when the snow melts and they can remove timber from the higher elevations.