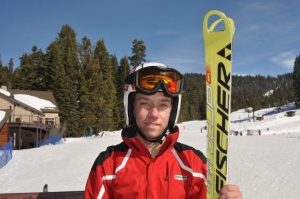 Pinecrest, CA– Trenton Powell of the Dodge Ridge Race Team has qualified for the Junior Olympics.

The 14-year-old Pinecrest native was selected by the Far West Ski Association, a Division of the United States Ski Association. The selected athletes competed in nine J3 qualifying races throughout the season. The racers were chosen by their top finishes in those combined races.

“We were thrilled to hear that Trenton qualified for the Junior Championship,” said Head Coach Brian Jarratt. “He has spent five years on the Dodge Ridge Race Team perfecting his race skills and has developed into an all-mountain athlete.”

Powell, the only representative from the Central Series will compete with his Far West teammates against other Western Region race teams from Alaska, the Pacific Northwest, Intermountain and Central regions.

“For the Junior Olympics, it is extremely difficult to do,” said Dodge Ridge Spokesperson Amber Jenquin. “Trenton is the only one going from the Central Series which is Bear Valley, Dodge Ridge, China Peak and Badger Pass. We’re all very proud of him.”

The Junior Olympic Championships will be held March 15th-20th in Squaw Valley.