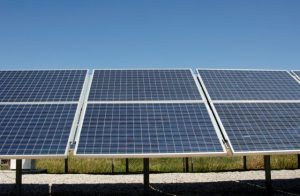 Sonora, CA– The Tuolumne County Board of Supervisors have agreed to start negotiations with a company interested in housing a 20 megawatt solar array in Jamestown.

Alltech Environmental is interested in using a portion of property near the former Jamestown Landfill to generate solar energy.  The cost of construction is estimated to be $125 million.

Tuolumne County purchased 91.2 acres adjacent to the former landfill for potential expansion but it was never needed due to its closure in the mid 1990’s. The property has for the most part remained vacant, with the exception of cattle grazing.

Alltech is proposing to lease the property for $10,000 a year and include a revenue sharing agreement. The company would employ 14 fulltime employees.

During the Supervisor’s meeting Tuesday, longtime Tuolumne County resident Terry Rice and CEO of Alltech Environmental said, “We’re excited about this because it’s something we can give back to the county. I’m also hoping this can relieve some of the budget problems the county may be having. This property is perfect for what we want to do.”