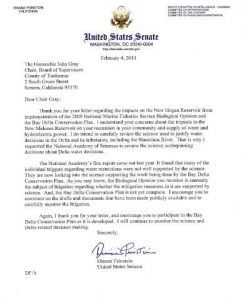 The Tuolumne County Supervisors contacted Senator Feinstein’s office with concerns about the Biological Opinion by the National Marine Fisheries Service that could result in a drawdown of New Melones throughout the year. The Supervisors were concerned about the science that went into the report and the effect proposed changes would have on the region.

Feinstein’s letter reads, “I understand your concerns about the impacts to the New Melones Reservoir on recreation in your community and supply of water and hydroelectric power. I do intend to carefully review the science used to justify water decisions in the Delta and its tributaries, including the Stanislaus River. That is why I requested the National Academy of Sciences to review the science underpinning decisions about Delta water decisions.”

The federal government is trying to protect the Central Valley steelhead from the operations of New Melones Reservoir. The Oakdale Irrigation District has been leading a legal battle to stall a drawdown of New Melones, and a federal court judge is expected to rule on a lawsuit in March. The lawsuit primarily questions the science that went into the study.

Feinstein adds in her letter, “The National Academy’s first report came out last year. It found that many of the individual triggers regarding water restrictions were not well supported by the science. They are now looking into the science supporting the work being done by the Bay Delta Conservation Plan. As you may know, the Biological Opinion you mention is currently the subject of litigation regarding whether the mitigation measures are supported by science. And, the Bay Delta Conservation Plan is not yet complete. I encourage you to comment on the drafts and documents that have been made publically available and to carefully monitor the litigation.”

At the end of the letter, Feinstein said she will continue to monitor the science that goes into the decision making.