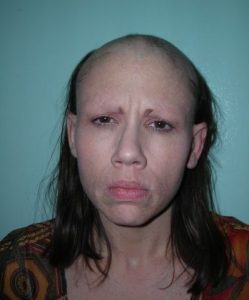 Sonora, CA – A Sonora woman was arrested over the weekend during a traffic stop.

The Police Department pulled over a vehicle at the intersection of Stewart and Bradford Streets because it had a false registration tag. An officer recognized a passenger, 36-year-old Marsha Guinn of Sonora, because she was arrested on January 7th for possession of methamphetamine.

As the officer conducted a warrant check on the occupants, he watched Guinn remove something from her sweatshirt pocket and place it under the seat. The officer found the item, a black bag, and saw that it contained methamphetamine. Guinn was arrested and booked into Tuolumne County Jail. She faces a felony charge of possession of a controlled substance.