Turkeys Accused Of Holding Up Traffic 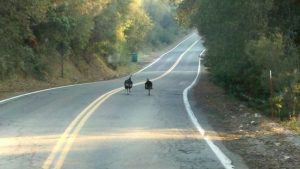 Two turkeys were causing problems for motorists this morning on Campo Seco Road.

The California Highway Patrol received reports that the pair was walking in the middle of the road and chasing passing vehicles. The first complaint was called in at 7:42am, and the turkeys had reportedly left the area by 9am. The activity was just west of Campbells Flat Road.

The turkeys were caught in this picture taken by a myMotherLode.com viewer.