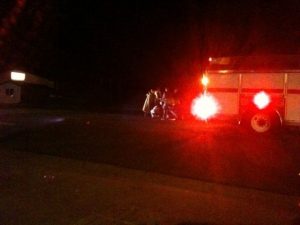 A pedestrian was killed last night after being hit by a vehicle in front of the Timber Hills Shopping Center.

The Police Department reports that 33-year-old Karl Walters of Sonora was wearing dark clothing and walking in one of the traffic lanes on Mono Way for an unknown reason. He was struck by an oncoming Chevy Tahoe at 6:38pm. Witnesses told the Sonora PD that the driver of the Tahoe was traveling at the posted speed limit, and indicated that they also couldn’t see Walters walking in the roadway.

Walters was taken to Sonora Regional Medical Center where he was later pronounced dead. The driver of the Tahoe is an unidentified 39-year-old from Twain Harte.