Calaveras Fair’s Goal Is Self Sustainability 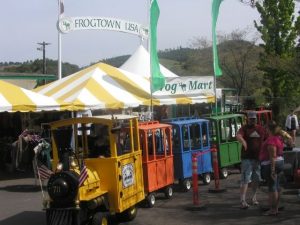 Angels Camp, CA — The Calaveras County Fair is looking at ways to become self sustainable, something that may become a necessity as Governor Jerry Brown plans to cut fair funding.

The Calaveras County Fair has received its state allocation for 2011, which equals approximately 18 percent of its annual budget. The 2012 allocation is still in question, as Brown has put fair funding on the chopping block.

“Our board has been working towards a goal of being self sufficient and not relying on that stipend,” says Laurie Giannini, Fair Spokesperson. “We have a newly formed 501 (c) (3), Friends of the Calaveras County Fair, and their raising funds for capital improvements and other things, so hopefully someday we can become self sufficient.”

The Board of Directors is also looking at ways to make additional proceeds during the fair, and the possibility of renting out the fairgrounds to more events throughout the year. This year’s Calaveras County Fair and Jumping Frog Jubilee is coming up May 19-22.