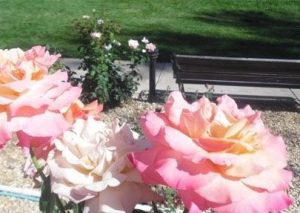 For gardeners with roses, it’s pruning time. It’s also time to add to their rose garden with bare root roses. Choosing between hybrid teas, floribundas, grandifloras, po-lyanthas, shrubs, old-fashioned, or climbing roses can be mind-boggling and the yearly maintenance of each type should be considered in your decision.

Pruning contributes to the health (leaves the strongest canes on the plant), productivity (promotes flower size and quality), and longevity (stimulates new growth) of rose plants. Pruning gives the plant an attractive shape and keeps it at a desirable size. Pruning should be accomplished before the plant breaks dormancy, just when buds begin to swell and after the danger of frost is past. Anytime from now until early spring is the time to prune here in the foothills. Tools required for pruning roses consist of sharp pruning shears, long-handled loppers, a fine-toothed curved saw and a pair of rose gloves or leather garden gloves.

Generally there are three types of pruning; severe, moderate, and light. The age, size, and growth habit of your roses determine the type you should use. Severe or heavy pruning can be used if you want to reduce the size of the plant and promote showy, but few, blooms and should be used on vigorous well-established plants. You would leave only 3-4 canes 6-10 inches above the bud-union (where the stem joins the roots) for this type of pruning. Moderate pruning develops a much larger bush and is the best method for most gardeners. Leave 4-8 canes each about 18-24 inches above the bud-union. Last-ly, there is light pruning where only diseased, broken, and crossing canes are removed. Canes left are cut back 3-4 feet above the bud union.
Pruning cuts should always be to a strong outside bud. However, if you are remov-ing the entire cane, cut at the bud union where the cane originated. All cuts should be made at approximately a 45 degree angle, one-fourth inch above the bud or bud union.

To begin your pruning, remove all dead canes and any canes that do not show healthy growth. Next remove branches running through the middle of the bush and those rubbing on healthy branches. Always remove shoots (suckers) that may be growing be-low the bud-union. Once you have accomplished those cuts, stand back and look at the plant. Are there branches that seem to make the plant lopsided? If so, cut these back or remove them completely. Thin out the remaining healthy canes to the desired height creating a bowl shape with an open center. As a general rule, remove from one third to no more than one half the length of the previous season’s growth. Master Gardeners recommend sealing all cuts with Elmer’s white glue to prevent insect or disease infestation.

Hybrid teas and grandifloras can be successfully pruned using these guidelines. Floribundas, polyanthas, shrub roses, and climbers require additional information.
The former-floribundas, polyanthas, and shrub roses-are grown more for the quantity of blooms rather than for the quality of individual blooms. Cut back previous year’s
growth only by one-fourth and leave as many strong new canes and stems as the plant produced. Bush roses of the same variety can be sheared as a hedge by pruning all plants to the same height.

Climbers should not be pruned for the first two or three years. Remove only dead, weak, and twiggy wood, allowing the plants to produce long, flexible canes. Most of the blooms will come from the lateral branches that are produced on the long canes. Train the long canes along a fence or over an arbor. When pruning climbers, if the variety only blooms once a year, it should be pruned after blooming. Repeat bloomers are pruned at the same time as hybrid teas and other roses. Cut back lateral canes to within two to three buds from the main canes as well as removing dead, weak and woody stems.

In order to reduce my yearly pruning task, every time I cut my roses for a bouquet or even if I’m just dead-heading, I cut the stems one or two inches longer than I need. By doing this I am pruning the roses all year long. At this time of the year my work in the rose garden is much less than anticipated. I also look for suckers (growth below the bud-union) and weak or damaged canes and remove them all year long.

Carolee James is a Master Gardener who lives in the foothills of the Mother Lode.