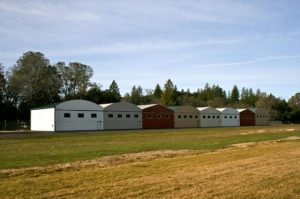 Columbia, CA– Phase One of a four phase hangar project has been completed at Columbia Airport.

The developer, Legacy Aviation Development/Gold Country Hangars, says the eight new hangars added recently, have been designed with a vintage 1930’s look and are reminiscent of the bi-gone era of aviation.

The project was instrumental in bringing a number of jobs to the area. Ten local businesses were used including grading contractors and soils work crews, as well as electrical and survey companies.

“No new hangars have been built for rental or sale at Columbia Airport since 1982,” said Jim Thomas, Deputy Director of Operations for Tuolumne County. “I’m thrilled to see the new Gold Country Hangars complex completed and occupied.  Their vintage hangar motif enhances the uniqueness of Columbia Airport’s grass runway and fly-in campground.”

The project at Columbia Airport consists of four phases with the second and third phases beginning in late spring. When completed, the project will total 20 new hangars.