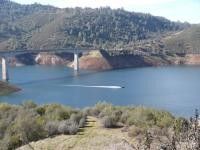 A National Marine Fisheries Service Biological Opinion calls for significant water draw downs throughout the year, which could have an effect on power generation and recreation. The Biological Opinion calls for New Melones Reservoir to be drained down below 500 TAF (thousand acre ft.), including parts of the summer months, and cooling water will be brought down to flood the lower Stanislaus River.

The Oakdale Irrigation District has been leading a legal battle to stall the action, and a federal court judge is expected to rule on a lawsuit in March.

The federal government is trying to protect the Central Valley steelhead, a fish, from the operations of New Melones Reservoir. The lawsuit questions the science that went into the study. The Supervisors previously sent a letter raising concerns about the Biological Opinion.