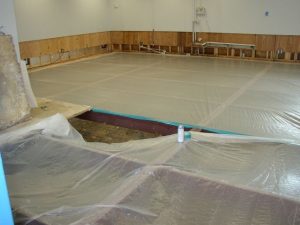 Soulsbyville, CA– The cleanup continues this week at Soulsbyville School after flooding on New Year’s Eve caused major damage to the Falcon Gym and district office.

According to Soulsbyville Superintendent Jeff Winfield, the freezing temperatures caused the pipe damage.

“As best we can tell, it happened during the day,” said Superintendent Winfield. “The supply lines that furnish water to the sprinkler system in the new Falcon Gym burst,” “We had extensive damage. If you can imagine, thousands of gallons of water pouring down on the gym space.”

Winfield says the cleanup is going well so far and that contractors have estimated repairs on Falcon Gym to be completed by June 1st.

There was also flooding damage to the district office and the adjacent room December 1st due to freezing pipes that burst. The Superintendent is hoping repairs can be completed in about a month.

Although no preliminary numbers have been finalized on the cost of repairs, Winfield says he believes the cost of damage to the gym and district office is at least $150,000 and that the gym floor itself is worth $60-80,000.