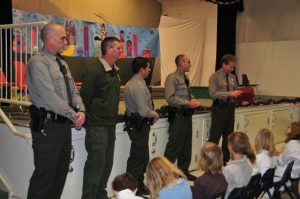 Three students in Yosemite have been honored for their quick thinking and bravery.

Park Superintendent Don Neubacher led a ceremony at the Yosemite Valley Elementary School honoring Carmen Ortiz, Angel Ortiz and Sierra Weber. Back on October 5, the three were playing at a picnic area near the Ahwahnee Meadow in Yosemite Valley, when a 4.5 ton rock fell approximately 50 ft. Weber became pinned beneath the rock. The other two ran to Yosemite Medical Clinic and notified staff members. Weber was flown to a hospital in the region where she remained for many weeks.

Weber, a resident of El Portal, is back home and has returned to school.