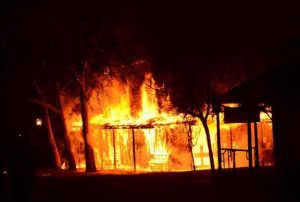 Columbia, CA — A man has been arrested for purposefully setting fire to the Columbia House Restaurant.

Witnesses started calling the Tuolumne County Sheriff’s Office at around 6:20pm Sunday stating that a man was causing a disturbance in Columbia State Historic Park, and “attempting to light something on fire.”

Officials soon arrived and found the Columbia House Restaurant fully engulfed in flames. Sgt. Jeff Wilson of the Sheriff’s Office says 21-year-old Daenon Vincent Brewer of Tuolumne was identified as a suspect by witnesses and arrested in connection.

“It was determined that Brewer forced entry into the front door of the restaurant and lit a Christmas Tree on fire,” says Sgt. Wilson. “Brewer was arrested and charged with arson, burglary, violating probation, being drunk in public, and possession of marijuana.”

The Columbia House Restaurant received heavy damage, but the structure is still standing. Most of the adjacent Angelo’s Hall survived undamaged.

The restaurant is located at 22738 Main Street in Columbia State Historic Park.

Brewer was on the Tuolumne County Sheriff’s Office Most Wanted list in September. To view the earlier story, click here.

He was also involved in an accident on Highway 108 in May of 2010. Click here to view the story.