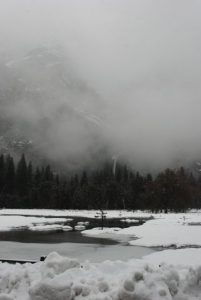 Yosemite, CA — After searching for ten days, Yosemite National Park Officials report they have called off the search for a missing plane. The Pilot, 68 year old Nicol Wilson of Santa Barbara, took off alone from Santa Barbara headed towards the Mammoth Lake Airport on Monday, December 17th. Rescue crews had been searching by air in the North Dome area, but were forced to stop due to the five feet of snow that fell in the area this past weekend.

Park Ranger Kari Cobb says, “Not only did the storm greatly hinder our searching efforts with low visibility and hazardous flying conditions, but it also dumped enough snow that if there is wreckage from the plane it would not be visible underneath all of the snow. We will, of course, resume the search again in the spring once the snow has started to melt and we can fly safely in the high country where we suspect the plane may have gone down.”


Nearly 60 personnel were involved in the search along with eight different aircraft including a helicopter from the California Highway Patrol and two fixed-wing planes piloted by the Civil Air Patrol.