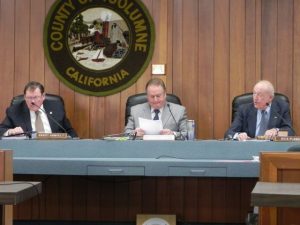 Judge Eric DuTemple was recognized for his 40 years of service to the Tuolumne County justice system. DuTemple recently announced his plans to retire.

Others that recently announced plans to retire or step down from their positions include Tome James with the Southwest Interface Team, Jerry Tannhauser of the Highway 108 Fire Safe Council, Bill Penrose of the County Roads Department and Charla Francis of the Historic Preservation Review Commission. All were recognized at this morning’s meeting.

Later today, the Board will recognize outgoing Supervisors Dick Pland and Liz Bass.