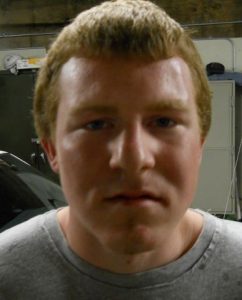 Sonora, CA — Sonora Police report a man not only punched the woman in the face several times, but smashed her head into a door until she passed out after she tried to retrieve a pair of socks from an apartment.

Officers were called to an apartment complex at the 200 block of Greenley Road Monday just before 7 p.m. regarding an assault. The victim, 22 year old Laura Mansfield, told the officers she had gone to the apartment to get a pair of socks from a woman there. Several witnesses saw Mansfield arguing with the woman and then being hit by her boyfriend, 19 year old Timothy Barlass of Sonora.

Witnesses told police that for no apparent reason during the argument, Barlass, charged  Mansfield and began punching her in the face until she fell to the ground. Then he kept hitting her and grabbed her head and slammed it into a door three times. Officers say Mansfield was unconscious for about five minutes after the attack.

Mansfield was taken to Sonora Regional Medical Center and treated for head injuries. Barlass was arrested and charged with felony battery resulting in great bodily injury.

Police say the incident is still under investigation.

Click here for map of where the incident happened.