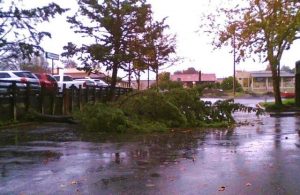 The next storm will move through the region through Sunday and bring heavy rain below 7000 feet.


One to three inches of rainfall is expected in the central valley.

According to the National Weather Service, rises in smaller creeks, streams and rivers may occur. Road flooding, rock slides or mud and debris flows are all possible.

Wind Advisories remains in effect for the Mother Lode and the Sierra Nevada through Sunday 4pm.

In the Mother Lode, winds of fifteen to twenty-five mph are likely with gusts up to forty mph.

In the Sierra, winds of twenty-five to thirty-five mph are expected with gusts up to eighty mph near the Sierra crest.

A few inches of snow is likely in the higher locations of the Sierra by Sunday night.

For the latest mountain pass conditions, log on to /traffic