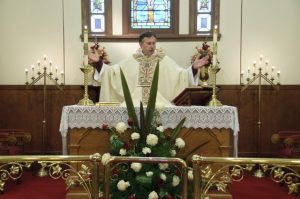 The family of Father Wolfgang and LaDonn Krismanits say a memorial service is scheduled for this weekend.

As reported yesterday morning, the couple was tragically killed in a car crash on Tuesday afternoon on Highway 156 near Hollister. Their 2002 Mercury Sable was hit by a car driven by 24-year-old Rudy Lopez of Morgan Hill. The CHP reports that Lopez had failed to stop for a red light. Lopez was taken to a nearby hospital to treat reported “major injuries.”

Father Krismantis was the leader of the St. James Anglican Church (Historic Red Church) in downtown Sonora. Daughter-in-law Summer Krismanits reports that a memorial service for Father Krismanits and LaDonn will be this coming Saturday, at 2pm, at the Chapel in the Pines by Twain Harte. It is open to the public.

Also, Sunday’s mass at the Red Church beginning at 10:30am will be in honor of the Krismanits. It will be presided by Bishop Eric Meenes.