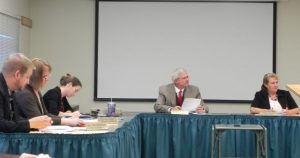 Sonora, CA — It appears unlikely the Tuolumne County Board of Education will move forward with proposed changes to the Superintendent’s contract.

Joe Silva had proposed to retire at the end of this month and then be reappointed on December 1st at a salary of $40,000. By doing so, it would have allowed him to start receiving CALSTRS pension benefits of $154,000 annually, on top of the revised salary. The total take home amount would have been over $194K. The move had the support of school board members because it would directly save the district $129K, each of the next two years. (Silva has stated that he plans to retire after his elected term expires in 2014)

However, CALSTRS heard about the plan and was not pleased. A representative contacted the district and threatened legal action if the school board signed off on the proposal. CALSTRS maintains that the plan is a violation of the state’s ED Code.

The Tuolumne County Board of Trustees had originally scheduled a meeting for this afternoon to vote on the proposal. Silva confirms that the meeting has now been cancelled, and indicates that there is little chance of it moving forward at this point.