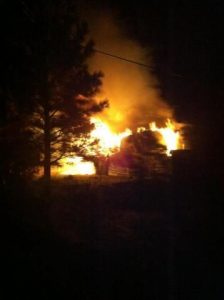 Twain Harte, CA – Flames were shooting out of the home on Big Hill Road and Kewin Mill Road Thanksgiving night when fire fighters arrived on the scene. Today CAL Fire says investigators are sifting through the rubble to determine what sparked the blaze. Flames shot out of the house near Twain Harte around 7:30 last night.


Cal Fire dispatcher Jim Devoll says, “First units at the scene reported that the house was 75 percent involved. The fire was contained at 9:47 and under control just after midnight.” Devoll adds, “Luckily no one was hurt in the fire.”

Big Hill Road was down to one-way traffic through the night and early this morning. It is open now.

Click here for a map of the fire scene.

A special thanks to Alana Wagner for sending in these photos.