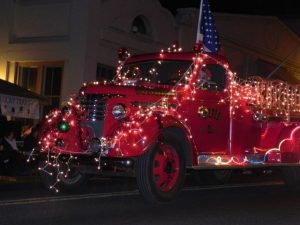 There will be three announcing stations along the parade route. Big Joe from Country 93.5FM KKBN, will be announcing near Courthouse Park. Mark Truppner from AM 1450 KVML will announce from the balcony of Go Figure (across from Bank of America). Justin Flores and Maryann Curmi from Star 92.7FM will be announcing from the GunHouse Hotel.

Parking will not be allowed along Washington Street from Elkin to William streets after 2 PM.

Tuolumne County Transit will run free shuttles and “Holly the Trolly” to and from downtown Sonora every fifteen minutes from 3 to 5 p.m. and 6:30 to 8 p.m. Pick-up points include Columbia State Historic Park and the Junction Shopping Center in east Sonora.

Following the parade, Santa will be visiting with parade goers inside of the Heart Rock Cafe (near Courthouse Park).