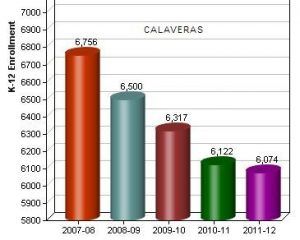 Some local school enrollment numbers are decreasing but many have leveled out.

California Basic Educational Data System, (CBEDS) uses the first Wednesday of October as a benchmark date for school district enrollment to be reported to the California Department of Education.

Soulsbyville Superintendent Jeff Winfield reported an increase in his school district of 16. The number reported last year was 491, this year it is 507. Jamestown at 342 last year and 336 this year. Chinese Camp has 30 students with 35 last year. Curtis Creek lost 48 students so they are down to 467.

Bellview and Columbia districts, both under Superintendent of Dr. John Pendley, made slight gains. Bellview has 128 enrolled up 26 from last year and Columbia has 588 up two students.

Calaveras County enrollment is down from last year’s attendance numbers. Calaveras Unified schools, including the high schools and six elementary schools, report an attendance of 3,206 down 115 from last year. The 2011-12 school year was down 53 from 3,374 students in 2010-2011. Bret Harte High School, including the alternative and independent study decreased by 82 students to 704.

The downward trend of Calaveras and Tuolumne County schools over the last five years can be seen in the photos taken from the CBEDS graphs. Most notably Tuolumne and Calaveras were with in 20 students of each other in the 2010-2011 school year. Tuolumne County Schools have lost 2,000 students over the past 10 years. Over 1,000 of those in just three years with a rebound of 429 students last year. Calaveras County has gradually lost 1,000 over the past 10 years.

The Tuolumne County School District Office Human Resources Director Dana Fritz says they do not expect to have the total enrollment report numbers until December. The CBEDS report will be available on the California Department of Education website within a year. Schools recieve funding based on the average daily attendence which is often between 90-95% of enrollment.