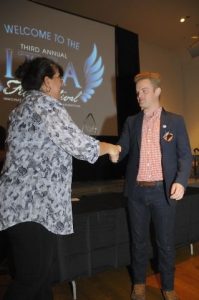 Some films received high honors at the third annual ITSA Film Festival held over the weekend in Sonora.

The event featured a Friday evening gala at the Sonora Opera Hall, which included a showing of select films and a question and answer session. There were also several informational workshops and screenings on Saturday and Sunday.

Nathan Larkin-Connolly’s film “Born Yesterday” received the awards for “Outstanding Film” and “Best Drama.” The film was received strongly and played on a theme of making every day of your life count.

Actor-producer Brett Stimely accepted the “Best Sci-fi Film” award for his short feature “Ray Bradbury’s Kaleidoscope.” Stimely noted that the film was screened for the legendary writer Bradbury shortly before his passing, and received his strong endorsement.

Other filmmakers that received honors:

Ari Costa – Best Comedy for “Leader of the Pack.”

Christopher and Christine Kezelos – Best Animation for “The Maker”

2012 marked the third year of the ITSA Film Festival. The non-profit event was founded by David and Christina Wilkinson.