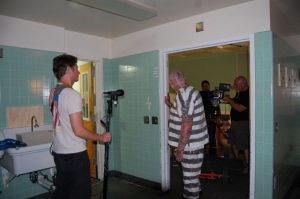 Having an empty hospital poses unique opportunities for filmmakers.

Tuolumne County Film Commissioner Jerry Day reports that the Tuolumne General Hospital campus has been utilized for six shoots over the past two years. It has been a mix of music videos, horror films and a pharmaceutical still shoot. It is noted that another independent feature film is expected to be shot at the facility within the coming weeks.

Day says it’s unique to have a hospital to shoot at, and the facility has caught the attention of filmmakers in places like Los Angeles and the Bay Area. Tuolumne County leaders are looking for a long term solution regarding what to do with the TGH campus, and Day has been told the hospital should be available for filming through at least June of 2013.

The photos above show a shoot conducted by pharmaceutical company Cepheid out of the South Bay, and the horror feature film “Obsidian Hearts”, which will soon be released in several formats.