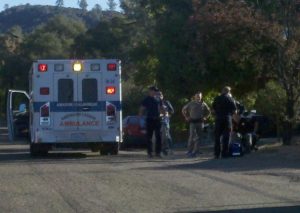 Arnold, CA — On Sunday at 7:40 am Calaveras sheriff’s deputies received a report that a man had been shot. The home was in the 1800 block of Rawhide Road in Arnold.

An investigation revealed Robert Terry, a 36 year old from Arnold, was arguing with Jimmy Terry, a 25 year old from Murphys. Jimmy is the nephew to Robert, they were reportedly arguing over Robert “ratting out” Jimmy over thefts in the Arnold/Murphys area Robert alleges Jimmy was involved with. Jimmy is a parolee with a felony warrant out for his arrest.

Calaveras Sheriff Officials say that during the dispute, Robert told Jimmy to leave the property, and Jimmy charged and threatened to kill him. Robert shot Jimmy in the abdomen with a modified rock salt filled shotgun shell.

Jimmy fled the scene in his black 4-door Audi, which was driven by his girlfriend, Crystal Towle, age 24 of Murphys.

An Angels Camp Police Officer observed Jimmy’s vehicle pass him heading westbound on Highway 4. He pursued the vehicle, but lost sight of it near Highway 4 and Parrot’s Ferry Road.

Anonymous tips eventually led the officers and deputies to a residence on the 1900 block of Sugar Pine Drive in Douglas Flat, where Jimmy’s vehicle was parked. While at the Sugar Pine residence the deputies located the driver, Towle, hiding in the area. She was placed under arrest, but refused to provide a statement concerning the events surrounding this incident.

Deputies received information that Jimmy was hiding in the crawlspace under a nearby residence. The deputies, along with a K9 officer from Angels Camp Police searched and located Jimmy hiding in the crawlspace. He received medical care at the scene, but refused to provide the deputies with a statement. He was transported to a Modesto area hospital for a gunshot wound to his abdomen.