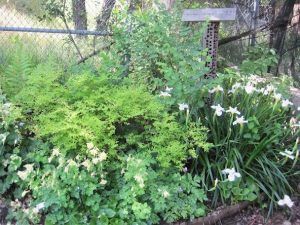 Native plants are essential to our well-being says Professor Douglas Tallamy of the University of Delaware. A garden’s insects depend on native plants and, in turn, those same insects are fodder for more bugs, spiders, birds, amphibians and other creatures-all chipping in to maintain our food web.

Insects supply us with many services including pest control, waste disposal, soil aeration and pollination of at least a whopping 30% of the food on our tables. Of the nine million or so insect species on earth, only one percent creates a negative effect writes Dr. Tallamy in “Bringing Nature Home: How Native Plants Sustain Wildlife in our Gardens.” The more diverse the insects and spiders in our yards, the better off we will be.

Why don’t bugs thrive on non-native plants? Over millennia, insects evolved along with only a few plant families-those plants with which they co-existed. They did not develop the ability to digest those plants with which they did not come in contact. Ironically, many of the exotic (non-native) plants in our gardens are popular precisely because they are not palatable to our local insects (even though we don’t usually notice insect damage until it surpasses ten percent).

CALIFORNIA IS A BIODIVERSITY HOTSPOT. Our topography bestows a variety of climates from below sea level to the highest peaks. We host the largest flora of any state in the United States. According to the California Native Plant Society, more than a third of the plant species found in California are found nowhere else on the planet. This diversity is a gift, but the challenges to preserve these resources are also great.

Tallamy fears that we may soon lose ninety-five percent of the wildlife species that were here before Europeans arrived. Only three to five percent of the land in the lower forty-eight states remains truly undisturbed, leaving little for our wildlife. Our chemical reliance further upsets the insect balance.

Then too, we intentionally introduce invasive plants from foreign lands that escape and become “thugs”-like tree of heaven (Ailanthus altissima), periwinkle (Vinca major) and English ivy. Unrelated to North American plants, they leave those insects and pathogens behind that kept them in check in their homeland. These plant villains gobble up land, nutrients, and water that could house and nourish native plants and their wildlife. For landscaping alternatives to invasives, go to http://www.cal-ipc.org/landscaping/dpp/index.php.

IT’S UP TO US. Tallamy believes biodiversity can be increased as long as we do it in time.

• Don’t plant an invasive thug and ask nurseries to remove them from their stock.

• Reduce/eliminate toxic pesticides and support governmental and environmental agencies in their efforts to do so.

• Protect existing habitat. For example, our diminishing oaks are quintessential wildlife plants teeming with up to 100 million insects and spiders within a single acre of woodland while supporting dozens of bird species.

• Plant natives. Become backyard preservationists by landscaping with plants indigenous to our own foothills. These plants are most likely to thrive and provide a lifeline for wildlife and for our food web.

Those animals that make it in the long run depend at least in part on us. We help make this decision every time we plant or remove something from our yard.

Vera Strader will acquire more native plants for her yard at the California Native Plant Society (CNPS) sale, 9:00 a.m. – 12:00 noon, Saturday, October 13, at Rocca Park in Jamestown. She hopes to see you there.