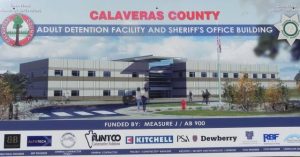 San Andreas, CA — The Calaveras County Supervisors met this week and voted on several items related to the new jail.

The Board approved an increase in the contract with Flintco Pacific Industries for the construction of the new jail. $194,000 was needed to cover unexpected aspects of construction. Assistant County Administrator Clay Hawkins says there were two changes asked for by the architect, one involved mechanical piping where 2nd floor space where some of the heating ventilation and electrical design needed to be rerouted. The second issue involved a man hole that the utility district wanted monitoring equipment to manage the water flow to prevent overflow issues. Hawkins also noted that at the time of the bid they knew there would be some changes.

The county board approved $16K for the change order from PSA Dewberry, Inc. for the design work of the jail.

The board has also voted to approve CSI telecommunications Inc. to move the old 911 dispatch to a new center and spec new radios, a new radio tower and vault.

Hawkins says they are 50% complete with the building’s construction. The jail project is on schedule to be completed by mid-summer of 2013.

In a related matter, the Board approved the Chief Probation Officer to execute an agreement with Sacramento County for the use of the Sacramento Youth Detention Facility. It would be at a per diem rate of $120 per day.