Bear Valley Will Open This Winter 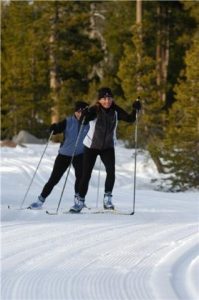 Bear Valley, CA – Bear Valley Mountain Ski Resort laid off nineteen people in June. That, along with a looming deadline to file an operating plan with the U.S. Forest Service by October 15th, had some questioning if the resort would re-open at all.

The comments on their Facebook page had laid-off workers and business owners in the area questioning whether the resort was shutting down.

One person wrote, “Seems really unlikely that they are going to be open this year. So here’s my question. Can I get my stuff out of my locker?”

Marketing Director for the resort Rosie Sundell says that Monday deadline will be met.  Sundell says, “What created the uneasiness was there wasn’t a clear date that said everybody will be back on mountain on this day. We’re getting ready to get people back on board and get this mountain open.”

Sundell says a total of 36 workers were laid off at the end of last season. She says they hope to bring most of those people back. Sundell says they are also having a Job Fair on October 28 in Arnold. She says nearly 300 people could be hired for the new ski season.