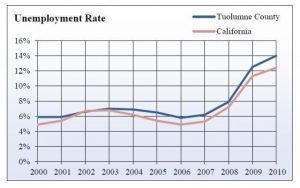 Sonora, CA — As part of a series of news stories that look at the Tuolumne County Profile 2012 Community Indicators Project, our focus is on the economic indicators.

The information is provided by the Sonora Area Foundation who contracted with the Center for Economic Development at California State University, Chico to create the study. It aids the community in assessing the needs of Tuolumne County.

The report states “Tuolumne County was hard by the past recession but there are factors that have lessened the blow.” It also states that, “The local economy [is] supported by large amounts of government spending and employment.” Statistics on page 29 show that 22.2% of the total jobs by industry in Tuolumne County are classified as government or government enterprises. The state average is only 13.6%. Government earnings were listed as 34.6% of the total earnings with $334.8 million.

The unemployment rate “skyrocketed” to 14 percent in 2010, compared to an historical average of 7-9 percent. Also noted was the “considerable seasonality” to the county’s employment because seasonal industries like tourism and visitor services are large drivers of the local economy in summer months.

The number of small employers (with 1-4 employees) were said to “dominate the economic landscape” representing 61% of all reported establishments. The percentage did decrease, reportedly offset by growth in establishments with 100-249 employees. With out including public administration , four industries employed over half the county workers: construction, retail trade, health care & social assistance, and accommodation & food services.

Personal income declined, but it was noted that the county has a less dominant workforce with income distributed more towards retirees through dividends, interest and benefits. Income earned by residents work¬ing outside the county, and contributions to social security increased faster than in the state from 2001 to 2009.

The previous news story “Indicators Profile Government As An Industry” is here.

The full report can be downloaded at www.tuolumnecountyprofile.org